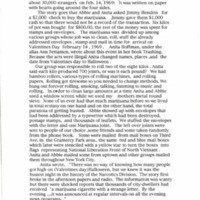 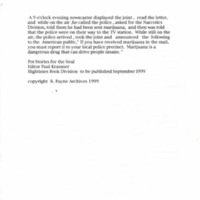 In early 1969, the Yippies sent an estimated 30,000 random strangers in New York City a marijuana cigarette (purchased with funds from Jimi Hendrix) and this letter. The letter states that they were doing it to "clear the garbage from the air" and debunk myths about pot's dangers. The stunt made television news, and one news anchor (with joint in hand) called the police on the air. When law enforcement arrived, they confiscated the joint, and told viewers, "Marijuana is a dangerous drug that can drive people insane." Roz Payne participated in this action.