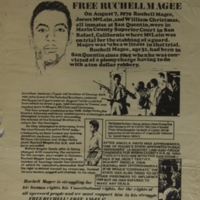 Ruchell Magee was born in 1939. In 1963, Magee was convicted of aggravated kidnapping over a dispute involving $10 of marijuana. While in prison, Magee learned about African American history, the black liberation struggle and became politicized, joining the Black Panther Party.

While imprisoned during the 1960s, Magee dedicated much of his time to studying law and petitioning the court to challenge his conviction, stating the the U.S. criminal justice system “used fraud to hide fraud” to convict African Americans and other political activists. He was able to overturn his initial conviction and earn a new trial based on a falsified transcript. In essence, Magee argued that his conviction was based on fraudulent grounds, denying him his constitutional rights and holding him involuntarily, making him a slave. As such, he claimed, he and others had a legal right to do everything in their power to escape enslavement. “My fight is to expose the entire system, judicial and prison system, a system of slavery,” he wrote. “This will cause benefit not just to myself but to all those who at this time are being criminally oppressed or enslaved by this system.” During this period, Magee took the middle name “Cinque,” in honor of a slave who escaped the slave ship, Amistad, and won his freedom in a Connecticut court. Magee also hoped his case might draw attention to the broader injustices within the American legal system.

On August 7, 1970, just a few months before Magee was eligible for parole, 17-year old Jonathan Jackson, the younger brother of black radical, George Jackson, burst into the Marin County courtroom of Superior Court Judge Harold Haley, where James McClain was on trial for assaulting a guard in the wake of Black prisoner Fred Billingsley’s murder by prison officials in San Quentin Prison in February of 1970. Carrying three guns registered to Angela Davis, Jackson, with the help of McClain and Ruchell Cinque Magee, who was set to testify as a witness in McClain's trial, seized Judge Haley and ordered attorneys, jurors and court officials to lie on the floor. Magee freed another testifying witness, Black Panther William A. Christmas, who also aided in the escape attempt. In addition to their own freedom, the group sought a trade -- the release of Judge Haley for the “Soledad Brothers,” George Jackson, Fleeta Drumgo, and John Clutchette, who were charged with killing a white prison guard at California’s Soledad Prison. During an effort to flee the courthouse in a van, a shoot-out with police took place, killing Jackson, McClain, Christmas and Judge Haley. Two other hostages, Prosecutor Gary Thomas and juror Maria Elena Graham, were also injured, but survived. Ruchell Magee was the only abductor to survive.

In the legal proceeding that followed the incident, prosecutors attempted to get Magee to testify against Angela Davis, but he refused. Ultimately, he pled guilty to aggravated kidnapping in exchange for the Attorney General requesting a charge of murder be dropped. Magee later tried to withdraw his guilty plea, but was unsuccessful. In 1975, he was sentenced to life in prison. Over the years, Magee has continued to petition the court for his release and to help other prisoners with legal challenges.