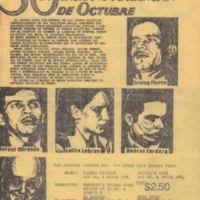 This leaflet encourages New Yorkers to participate in an upcoming march in Washington, D.C., to support Puerto Rican Nationalism, as well as "political prisoners" in the U.S. associated with the cause. The flyer features five imprisoned nationalists. Four - Lolita Lebrón, Irvin Flores, Andrés Figueroa Cordero, and Rafael Cancel Miranda - had been imprisoned after entering the U.S. Capitol Building on March 1, 1954, and opening fire with automatic pistols, wounding five congressmen. The fifth, Oscar Collazo, attempted to assassinate President Harry S Truman on November 1, 1950. The 1950s were a time of insurgent Puerto Rican nationalism, with a variety of actions on the island and in the U.S. On October 30, 1950, the Puerto Rican Nationalist Party organized a series of uprisings in various Puerto Rican cities. The date for the 1954 attack on the U.S. Capitol was chosen because it coincided with the inauguration of the Conferencia Interamericana (Interamerican Conference) in Caracas. The activists hoped to call attention to Puerto Rico's independence cause, particularly among the Latin American countries participating in that conference. During the late-1960s, Puerto Rican nationalism saw a resurgence along with other struggles for self-determination and liberation.