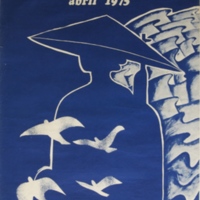 This 1975 poster, by Cuban designer and filmmaker, Alfredo Rostgaard, commemorates the Fall of Saigon, when North Vietnamese and Viet Cong forces captured the South Vietnam capitol, compelling an end to the Vietnam War. The poster was published by OSPAAAL, the Organisation in Solidarity with the People of Africa, Asia and Latin America, the main publisher of international solidarity posters in Cuba. Notably, these colorful propaganda posters were not designed to be posted on walls within Cuba, as others were. Instead, they were folded and stapled inside the magazine, Tri-Continental, where they were then distributed internationally. Rostgaard was the artistic director of OSPAAAL for nine years, beginning in 1966.