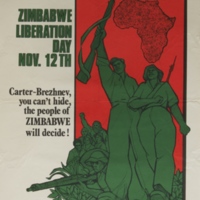 This poster, promotes a Zimbabwe Liberation Day event in Pittsburgh, sponsored by the local chapter of the African Liberation Support Committee. According to the African Activist Archive, “The African Liberation Support Committee (ALSC), a black activist organization that supported Pan Africanism, was organized at a conference in September 1972 in Detroit, Michigan. ALSC grew out of the first African Liberation Day (ALD) on May 27, 1972 that drew some 60,000 demonstrators in cities across the U.S. and Canada. The first ALD grew out of a trip of a group of black activists to Mozambique's liberated areas in the summer of 1971. One of the activists on that trip was Owusu Sadaukai who, upon his return, convened a meeting in Greensboro, North Carolina that led to the first ALD demonstration, which was designed to show support for African liberation struggles. A second ALSC conference was held in 1974 and was attended by 51 local committees from 27 states and six countries. ALSC organized African Liberation Day each May, and in 1973 demonstrations were held in more than 30 cities with an estimated 100,000 participants. The 1973 African Liberation Day included a call to boycott Portuguese products and Gulf Oil because of its operation in Angola. By 1974 ideological conflicts and other factors including class and regional differences weakened the organization. Many of those who had been involved in ALSC went on to found or join other organizations supporting African struggles against colonialism and apartheid.” During the late-1970s, the United States and Soviet Union engaged in diplomatic maneuvers to discuss Cold War politics on the African continent, including Zimbabwe (formerly Rhodesia).