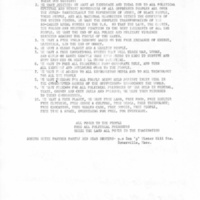 Founded in 1968 by Pun Plamondon, Leni Sinclair, and John Sinclair as a response to Huey P. Newton’s call for separate, white, anti-racist groups in support of the Black Panther Party, the White Panthers served as a countercultural group dedicated to "cultural revolution." The group was most active in Detroit, Michigan, and was connected with the porto-punk band, MC5. Though a white anti-racist organization, the White Panthers worked with a variety of other groups in what was known as the Rainbow Coalition.