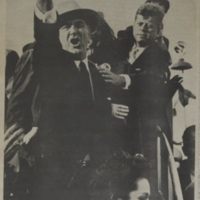 This poster features a 1960 photo by Richard Pipes, a photographer for the Amarillo Globe-News, of then Vice-Presidential candidate, Lyndon B. Johnson, yelling at the pilots of a nearby airplane to shut off their engines so that Democratic Presidential candidate, John F. Kennedy, could speak. According to the U.S. Senate website, “In the fall, Johnson campaigned intensely, conducting a memorable train ride through the South. He also pressed for a joint appearance of the Democratic candidates somewhere in Texas. They arranged the meeting at the airport in Amarillo, where campaign advance men stopped all air traffic during the brief ceremonies so that the candidates could address the crowd. But they had not counted on the Republican-leaning airline pilots, who deliberately ran the engines of their planes in order to drown out the speakers. At the close of the ruined appearance, a photographer snapped a concerned Kennedy placing his hand on Johnson's shoulder, trying to calm his angry, gesticulating running mate.” Kennedy poked fun at the noise during his speech, quipping, "That is Dick coming in." (Richard Nixon was also campaigning in Texas that day) and "They can’t stop the truth anyway. I don’t care how much that engine warms up."