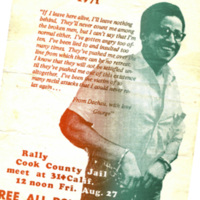 Flyer for a "Free All Political Prisoners" rally outside the Cook County Jail, featuring George Jackson.

George Jackson was imprisoned for armed robbery in 1961 and placed in San Quentin Prison before being transferred to Soledad Prison. While incarcerated, Jackson became radicalized and formed a Maoist-Marxist group, the Black Guerrilla Family. He was also a member of the Black Panther Party. In 1970, he and two other inmates were charged with the murder of prison guard, John Vincent Mills, following a fight. They became known as the Soledad Brothers and were seen by many radicals as political prisoners. Jackson was also an author and published the influential, "Soledad Brother: The Prison Letters of George L. Jackson." Jackson was killed by guards at San Quentin during an escape attempt in 1971. Many activists believed he was murdered as retaliation for his activism.

The flyer includes a portion of a quote from Jackson:

“If I leave here alive, I'll leave nothing behind. They'll never count me among the broken men, but I can't say that I'm normal either. I've been hungry too long, I've gone angry too often. I've been lied to and insulted too many times. They've pushed me over the line from which there can be no retreat. I know that they will not be satisfied until they've pushed me out of existence altogether. I've been the victim of so many racist attacks that I could never relax again..."