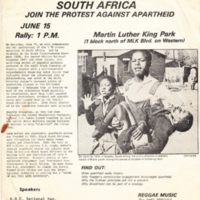 This flyer publicizes a protest rally in Martin Luther King, Jr. Park in Los Angeles to commemorate the 9th anniversary of the 1976 Soweto Uprisings in South Africa. The anti-Apartheid movement in the U.S. sought to compel American corporations to "divest" from South Africa.