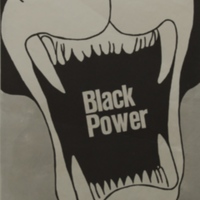 This 1968 poster, by Cuban designer and filmmaker, Alfredo Rostgaard, promotes the Black Power movement and revolutionary violence. The poster was published by OSPAAAL, the Organisation in Solidarity with the People of Africa, Asia and Latin America, the main publisher of international solidarity posters in Cuba. Notably, these colorful propaganda posters were not designed to be posted on walls within Cuba, as others were. Instead, they were folded and stapled inside the magazine, Tri-Continental, where they were then distributed internationally. Rostgaard was the artistic director of OSPAAAL for nine years, beginning in 1966. A statement by OSPAAAL was included with this poster: “On the occasion of Dr. Martin Luther King’s assassination, we have published a poster that is now being circulated all over the world. We are sending you herewith a certain amount of these posters, which may be used in your country for the activities to be carried out in this regard.” This poster was later re-purposed by the Black Panther Party as a part of the Free Huey! campaign. OSPAAAL published several posters by Emory Douglas, Minister of Culture for the Black Panther Party.