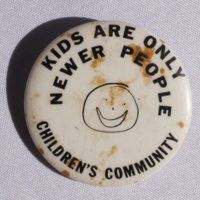 The Children’s Community School in Ann Arbor, Michigan, was an experimental primary school modeled after Summerhill, the more famous alternative school in England that was popular among education reformers and counterculturists during the 1960s. The CCS, which was established in the mid-1960s, was student-led, emphasized "love and understanding" toward children and practiced equality between black and white students.

Bill Ayers and Diana Oughton, who both went on to greater fame (or, is it infamy?) as members of SDS and the Weather Underground, served as early leaders of the school. By 1968, a series of challenges forced the school's closing.

Diana Oughton created this fundraising button for the Children's Community School, which features the CCS logo, a hand drawn smiley face, and the phrase, “Kids are only newer people.”