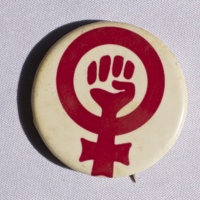 According to Jo Freeman, "The feminist button depicting a clenched fist inside the biological female symbol was produced by Robin Morgan for the second Miss America Pageant demonstration, in 1969. Unlike the double X, it combined the elements of defiance and revolution with that of femaleness. The original version was a dark red on a white background. It has undergone some regional changes -- Boston's button is outlined, Chicago's has narrow lines, New Haven's fist crashes through the top of the female symbol-- but the basic design is the same.
Initially, Robin Morgan worried over the choice of a red button for this particular demonstration. Ever conscious that major corporations like to co-opt incipient protest movements, she imagined that the cosmetic firm sponsoring the pageant might respond by manufacturing a matching lipstick named 'Liberation Red.' Therefore, if we were asked about the button, we were instructed to reply that the color was 'Menstrual Red.' No one would name a lipstick that."