As Goes Burlington So Goes France 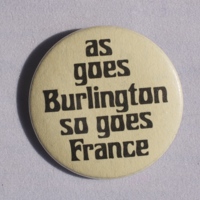 As Goes Burlington So Goes France

Drawing from a Doonesbury comic by Gary Trudeau, this button includes the phrase, “As goes Burlington, so goes France” as a parody of the U.S political saying dating from the nineteenth-century, “As Maine goes, so goes the nation.” As a member of the Liberty Union Party, Bernie Sanders’ successful 1981 mayoral election in Burlington, Vermont, represented the state’s liberal-left position, in contrast with the emergence of the New Right at the same time.