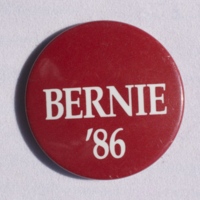 Bernie Sanders, an Independent from the state of Vermont, ran as the third party candidate in the state's 1986 gubernatorial race between Democratic candidate Madeleine Kunin and Republican candidate Lieutenant Governor Peter Smith. Sanders lost the race; however, he remained as the Mayor of Burlington until 1989 when he was elected in 1990 to the U.S. House of Representatives. In 2006, Sanders won election to the U.S. Senate from Vermont, where he still serves. In 2016, Sanders shook up the Democratic presidential nominating process by giving the heavy favorite, Hillary Clinton, a strong challenge before ultimately losing the contest.