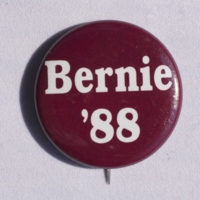 In 1988, Independent Burlington, Vermont, Mayor, Bernie Sanders, ran against Republican, Peter Smith, and Democrat, Paul Poirier, for the state's lone seat in the U.S. House of Representatives. Sanders lost to Smith by four percentage points in 1988, but came back to defeat Smith by sixteen points in 1990. Sanders held the House seat until 2006, when he moved on to the U.S. Senate.