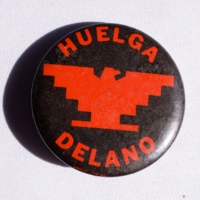 The Delano Grape Strike was organized by Cesar Chavez, Delores Huerta and the United Farm Workers of America and lasted from 1965 to 1970. The campaign incorporated nonviolent strategies such as boycotts and grassroots organizing to challenging the low pay of migrant workers by table-grape growers, namely the DiGiorgio Corporation and Schenley Industries. The Delano Strike, which received considerable national attention, ended in July 1970 with the signing of an agreement between the UFWA and the DiGiorgio Corporation.