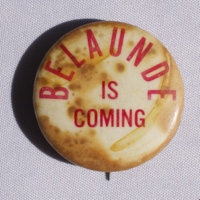 Fernando Belaunde Terry was a two-time president of Peru, from 1963-68 and then again from 1980-1985. Rising to power initially in the 1960s as a liberal/left reformer, Belaúnde mixed a traditional indigenous Inca emphasis on community and cooperation with a social democratic economic orientation. During his administration, the Peruvian government initiated a number of important internal development projects, including a highway system connecting the South with the more remote northern region; several irrigation and hydro-electric projects; public housing in cities; formal legal recognition for numerous indigenous groups; expanded hospital network into uncovered areas; and increased social security coverage. Belaúnde was deposed by a military coup in 1968 and forced into exile in the U.S. In 1980, the military junta agreed to allow national elections, which were won by Belaúnde. He served again as President of the country from 1980 to 1985. Under Belaunde’s administration, Peru reinstituted constitutional rule and freedom of the press. Over time, Peru’s domestic economic troubles and foreign debt led to a decrease in Belaunde’s popularity.