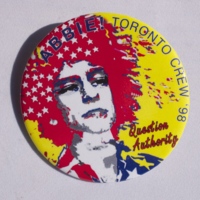 Written, produced, and starring Bern Cohen, the play Abbie! commemorates the life of Youth International Party founder and 60s icon, Abbie Hoffman. Hoffman’s long history in social and political activism is most well-known for his role in the 1968 police riot outside the Democratic National Convention in Chicago. Hoffman and his fellow Yippies practiced a kind of absurdist, anarchic and often theatrical approach to social critique and activism. For example, at the 1968 convention, the Yippies nominated a pig, "Pigasus," for U.S. President.