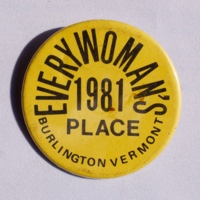 According to a brief history of Every Woman's Place,

"In February 1975, several women who were concerned about the unmet needs of women in our community met with representatives of the Department of Social Services and United Way. The women present ranged in age from 18 to 73 years of age. They included ADC recipients, middle and upper-middle income women, Black, Chicana, and White. They were women who worked at home and women employed away from home, married and single. They represented themselves as individuals and groups such as the League of Women Voters, Church Women United, National Organization for Women (NOW), Business & Professional Women, and the American Association of University Women.

The one single thing all had in common, besides the fact that they were women, was their knowledge of and concern for the problems which confront many women. In that first meeting, those problems began to be identified. The main identifiable problem areas were employment, assistance in crisis situations, assistance in knowing where to get the help and information they needed, and emergency child care.

The group unanimously decided that a center for women was needed to assist women with problems. The philosophy was and is to serve the unmet needs of every woman who needs assistance with emphasis placed on those women who are the least able to help themselves, the economically disadvantaged, minority women, women over 45, handicapped women and women with less than a high school diploma. Hence, the name, Every Woman’s Place came about."

In 1980, Every Woman’s Place, Inc. merged with Webster House forming a community resource for women, young adults, and children in economic and domestic crisis. In 1994, the group moved into a new building, which it paid off by 2007. Among the resources that continue to be available at the organization include mental health counseling, youth development workshops, educational resources, and support networks."