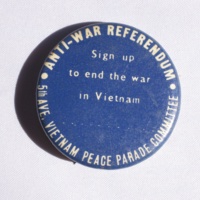 During the mid-1960s, the Fifth Avenue Vietnam Peace Parade organized dozens of peace and anti-war groups in a series of anti-war parades, “peace-ins,” an anti-war referendum, and other events. Like many organizations during this period, the group targeted university and college campuses in order to rally support against the Vietnam War. Dave Dellinger, who would later gain notoriety as a member of the Chicago 7 during the 1968 Democratic Party Convention in Chicago, and Norma Becker, who worked for the War Resisters League, led the group.