The Draft is Stopping 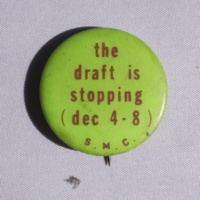 The Draft is Stopping

The Student Mobilization Committee was formed in 1966 "to coordinate opposition to U.S. involvement in the war in Vietnam among college and high school students." Originally named The Vietnam Day Committee the SMC organized protests on campuses and in cities. While the group opposed the war, generally, it specifically focused on the draft. The SMC is also notable as one of the first Vietnam-era anti-war groups that included both civilians and soldiers. This button promotes the December 4-8, 1967, "Stop the Draft Week" that took place in New York City. Demonstrations that week resulted in 585 arrests, including Dr. Benjamin Spock.