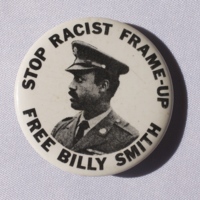 On March 15, 1971, a fragmentation grenade killed two white officers and injured another on the U.S. Army base near Bien Hoa, Vietnam. Private Billy Dean Smith, who was stationed at the base, was charged with the crime. Smith was an African American draftee born in Bakersfield, California, in 1948, the tenth of twelve children in his family. They lived in Texas for several years before moving to the Watts section of Los Angeles in 1957. Smith was staunchly critical of the War in Vietnam, citing the racialization of the draft and the “imperialist” motivations for the war. His case received considerable media attention in the U.S. and raised awareness of the racial injustice within the military legal system, bringing greater attention to what became known as “fragging.” According to Senate Majority Leader Mike Mansfield, “fragging” was the result of “an atmosphere that drives an American G.I. to kill his fellow G.I. or superior.. Fragging, I fear, is just an outgrowth of this mistaken, this tragic conflict.” Smith’s case also attracted the attention and support of a wide range of activists across the New Left, including Angela Davis and Fidel Castro. Castro called it “a new cause for the progressive movement and a new cause for international solidarity” and said, “A man became a criminal. A man who refused to destroy schools and hospitals and dikes, who devoted himself to refusing to kill Vietnamese people, who refused to kill women and children, to burn homes, to torture and commit all acts of this type. They are demanding his head and therefore there is now a new symbol: Billy Dean Smith.” In 1971, the Billy Dean Smith Defense Committee wrote, "This is an important case because of the wide array of issues it must, of its very nature, raise. For the first time in a long while, the case of Billy Dean Smith will put the built-in biases in the system of military justice -- and the Indochina war -- on trial. " In a letter published in Seize the Time, a newsletter by the Black Disciple Party, Smith wrote, "The Army is playing a very heavy game on me, and on all of the people at the same time. They are doing everything they can to keep my lawyers in place -- trying to keep information and evidence from them and to keep them from saying what has to be said. It is very clear that they will keep on trying to stop us from getting what we need for my defense." Ultimately, Smith was found not guilty of murder and attempted murder charges, though convicted of lesser charges stemming from the incident and given a bad conduct discharge.