Her Fight is My Fight, Free Angela Davis 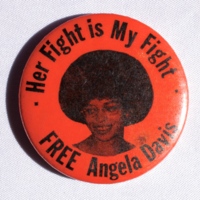 Her Fight is My Fight, Free Angela Davis

Angela Davis grew up in the “Dynamite Hill” area of Birmingham, Alabama, in 1944. Later, she moved with her mother to New York City and studied at Brandeis University, the Sorbonne and the University of California-San Diego. In addition to the segregation and racial discrimination she experienced as a child, Davis was deeply influenced by the 1963 murder of four young girls at the 16th Street Baptist Church in Birmingham, as well as the activism of the Student Nonviolent Coordinating Committee and Black Panther Party. In 1968, she joined an all-black branch of the Community Party. The following year, UCLA hired Davis as an assistant professor of philosophy, a contentious appointment given her radical views, ultimately leading to her dismissal.

In the early-1970s, Davis became increasingly active in efforts to improve prison conditions for inmates, including the Soledad Brothers, two African American prisoners and Black Panther Party members, George Jackson and W. L. Nolen, who were incarcerated in the late 1960s. On August 7, 1970, 17-year old Jonathan Jackson, the younger brother of black radical, George Jackson, burst into the Marin County courtroom of Superior Court Judge Harold Haley, where James McClain was on trial for assaulting a guard in the wake of Black prisoner Fred Billingsley’s murder by prison officials in San Quentin Prison in February of 1970. Carrying three guns registered to Angela Davis, Jackson, with the help of McClain and Ruchell Cinque Magee, who was set to testify as a witness in McClain's trial, seized Judge Haley and ordered attorneys, jurors and court officials to lie on the floor. Magee freed another testifying witness, Black Panther William A. Christmas, who also aided in the escape attempt. In addition to their own freedom, the group sought a trade the release of Judge Haley for the “Soledad Brothers,” George Jackson, Fleeta Drumgo, and John Clutchette, who were charged with killing a white prison guard at California’s Soledad Prison. During an effort to flee the courthouse in a van, a shoot-out with police took place, killing Jackson, McClain, Christmas and Judge Haley. Two other hostages, Prosecutor Gary Thomas and juror Maria Elena Graham, were also injured, but survived. Ruchell Magee was the only abductor to survive. Although Davis did not participate in the actual break-out attempt, she became a suspect when it was discovered that the guns used by Jackson were registered in her name.  Davis fled to avoid arrest and the FBI placed her on its “most wanted” list. Law enforcement captured her several months later in New York.  During her high profile trial, black militants and New Left activists made ‘free Angela” a powerful slogan. In 1972, a jury acquitted Davis on all charges.