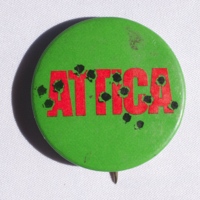 The Attica Prison uprising, which took place in upstate New York in September of 1971, was the largest prison rebellion since the Civil War. During the late-1960s and early-1970s, a prisoner’s rights movement emerged across the U.S. At the Attica Correctional Facility near Buffalo, prisoners complained about chronic overcrowding, censorship of letters, poor living conditions that limited them to one shower per week and one roll of toilet paper each month. Puerto Rican and African American prisoners, who made up a majority of the inmate population received especially harsh and discriminatory treatment, including the lowest-paying jobs, racial harassment and violence from the primarily white guards. Emboldened by the spirit of the Black Power movement and radical ideology, some inmates saw themselves as “political prisoners.”

As their demands continued to go unmet, the situation at Attica became increasingly volatile. On the morning of September 9, 1971, a small group of prisoners overpowered guards, spurring a more wide-spread uprising at the prison. In the initial chaos, Correction Officer, William Quinn, was badly beaten and thrown out a second floor window, which resulted in his death a few days later. Ultimately, a group of inmate leaders restored order within the prison and began negotiating with outside authorities, including Governor Nelson Rockefeller, through intermediaries that included noted civil rights attorney, William Kunstler, and New York Times columnist, Tom Wicker. Prisoners also requested Louis Farrakhan, from the Nation of Islam, but he refused. One leader of the prisoners, 21-year old, L.D. Barkley, famously said in an early statement, “We are men! We are not beasts and we do not intend to be beaten or driven as such. The entire prison populace, that means each and every one of us here, have set forth to change forever the ruthless brutalization and disregard for the lives of the prisoners here and throughout the United States. What has happened here is but the sound before the fury of those who are oppressed. We will not compromise on any terms except those terms that are agreeable to us. We’ve called upon all the conscientious citizens of America to assist us in putting an end to this situation that threatens the lives of not only us, but of each and every one of you, as well.” Prisoners issued a list of demands, such as better education and food quality, fair visitation rights, improved medical treatment and sanitation, less mail censorship, more religious freedom, fairer disciplinary and parole processes, an end to brutality from guards and, most controversially, amnesty for crimes committed in the course of the riot itself.

Gov. Nelson A Rockefeller refused to visit the prison during the take-over, instead breaking off negotiations and ordering state troopers and guards to retake Attica by force. During the siege, law enforcement shot indiscriminately, killing 9 of 42 hostages, as well as 33 prisoners. Retaliation against inmates by prison authorities was pervasive, including beatings, torture, burning, and sexual abuse. Evidence suggests Barkley initially surrendered along with other prisoners, but that officers searched him out then shot him in the back.

The New York State Special Commission on Attica later wrote, "With the exception of Indian massacres in the late 19th century, the State Police assault which ended the four-day prison uprising was the bloodiest one-day encounter between Americans since the Civil War." The rebellion at Attica did ultimately result in some modest prison reform, including a grievance procedure and more regular communication between prison authorities and prisoner representatives. In addition, lawyers successfully defended the prisoners who were indicted after the uprising and many years later obtained $8 million from the state for some of the survivors and the families of the dead. Similarly, the State of New York agreed to a $12 million settlement with the families of slain prison employees.

In the decades since, the Attica uprising has continued to carry political and cultural currency, referenced in books, film, television, music and poetry. According to Heather Ann Thompson, author of the Pulitzer Prize-winning 2016 book, Blood in the Water: The Attica Prison Uprising of 1971 and Its Legacy, the tragedy at Attica “shows the nation that even the most marginalized citizens will never stop fighting to be treated as human beings. It testifies to this irrepressible demand for justice. This is Attica’s legacy.”