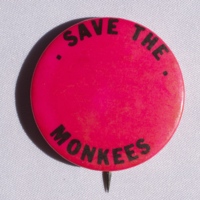 This button commemorates the NBC television series, The Monkees, which ran from 1966 to 1968. The series followed a fictional band, The Monkees, who sought stardom in the music business. According to vocalist and drummer, Mickey Dolenz, the Monkees were initially "a TV show about an imaginary band… that wanted to be the Beatles that was never successfu.l" Yet, in reality, beyond the tv show, the Monkees recorded several albums and became one of the most popular musical acts of the 1960s, selling more than 75 million records to date. The Monkees disbanded in 1971, but have reunited several times over the decades since to tour and record.