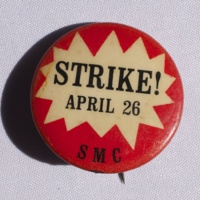 On April 26, 1968, the Student Mobilization Committee organized an international student strike, including teach-ins and sit-ins addressing the Vietnam War, anti-imperialism, racism, and the draft. Some have estimated that as many as a million high school and college students participated in the protest.

The Student Mobilization Committee, originally named The Vietnam Day Committee, was formed in 1966 “to coordinate opposition to U.S. involvement in the war in Vietnam among college and high school students.” The group, which was active until it disbanded in 1970, organized protests on campuses and in cities. It is also credited with being one of the first anti-war organizations of the 1960s-era to include civilians and soldiers alike.