I Support Viet Nam Veterans Against the War 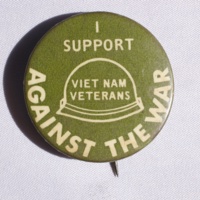 I Support Viet Nam Veterans Against the War

Vietnam Veterans Against the War was an anti-war organization founded in 1967 by U.S. military veterans. According to the organizational website for VVAW, the group was created in New York City “after six Vietnam vets marched together in a peace demonstration. It was organized to voice the growing opposition among returning servicemen and women to the still-raging war in Indochina, and grew rapidly to a membership of over 30,000 throughout the United States as well as active duty GIs stationed in Vietnam. Through ongoing actions and grassroots organization, VVAW exposed the ugly truth about US involvement in Southeast Asia and our first-hand experiences helped many other Americans to see the unjust nature of that war." In the 1970s, VVAW began “the first rap groups to deal with traumatic after-effects of war,” “exposed the shameful neglect of many disabled vets in VA Hospitals,” “helped draft legislation to improve educational benefits and create job programs,” “fought for amnesty for war resisters, including vets with bad discharges,” and “helped make known the negative health effects of exposure to chemical defoliants.”

VVAW members engaged in a number of significant actions during the long-1960s, including Operation RAW (“Rapid American Withdrawal”), the Winter Soldier Investigation, the Dewey Canyon III protests, the Walter Reed Memorial Service, Operation POW and a 1971 occupation of the Statue of Liberty.

Vietnam Veterans Against the War