The Bread is Rising 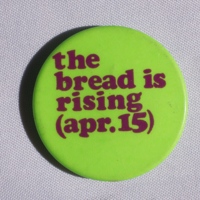 The Bread is Rising

Alluding to the secret code used by revolutionaries attending meetings during the French Revolution, “the bread is rising,” this button refers to the antiwar march organized by the National Mobilization Committee to End the War, which started in Central Park in New York City and ended at the United Nations. Dr. Martin Luther King, Jr, marched and spoke at the demonstration.