Dr. Spock Brought Me Up 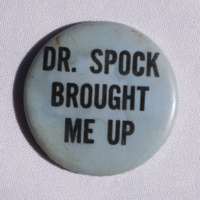 Dr. Spock Brought Me Up

Dr. Benjamin Spock was the author of the best-selling 1946 book, Baby and Child Care. Spock famously told mothers, "you know more than you think you do," about child-rearing and encouraged parents to be more flexible and affectionate with their children and to treat them as individuals. Critics have cited his influence in creating a more permissive, self-indulgent culture in the U.S. during the post-WWII era. In 1962, Spock joined the Committee for a Sane Nuclear Policy, otherwise known as SANE. By the second half of the 1960s, Spock became a key public figure in the New Left and anti-war movement. In 1968, Spock and four others were charged and convicted by the U.S. Attorney General, Ramsey Clark, of aiding and abetting draft resistance. That same year, Spock signed the "Writers and Editors War Tax Protest" pledge, vowing to refuse tax payments in protest against the Vietnam War. He participated in numerous anti-war demonstrations and was arrested several times. Spock was also involved in a variety of third-party political efforts.