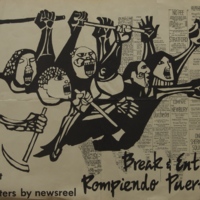 “Break And Enter / Rompiendo Puertas,” also known as “Squatters,” is a short film by the Newsreel collective in New York City. It focuses on "Operation Move-in," an anti-poverty and urban redevelopment campaign by Puerto Rican and Dominican families to actively reclaim unused, vacant housing on Manhattan's Upper West Side.

City officials, the courts, a hospital, Columbia University and private landlords were embroiled in a growing squatter movement yesterday as about 170 families illegally occupying apartments insisted on what they called their “Moral” right to remain.

At the end of the day, 25 men, women and children evicted from a building on West 15th Street won a promise from the city's Housing and Development Administrator, Albert A. Walsh, that the city would negotiate with the, landlord who evicted them.

The group, which went first to City Hall to see Mayor Lindsay, held a sit‐in at the administration's head quarters at 100 Gold Street all afternoon. They represented six families who had moved into empty apartments at 233 West 15th Street and were evicted by the police Monday.

The Rev. Robert O. Weeks, who had accompanied the families, hailed Commissioner Walsh's announcement as a “great victory,” declaring that “bureaucracy does work.”

Others in the group ex pressed skepticism, but left the Gold Street offices cheer fully, minutes after a contingent of policemen had arrived.

Mr. Weeks had sheltered the evicted families the previous night in Holy Apostle Episcopal Church, of which he is rector. He led them back to the church at Ninth Avenue and 28th Street, with Commissioner Walsh's assurance that the city would furnish them with 50 cots and blankets.

The group had demanded that the city take over the building from which they had been evicted‐ and convert it to units for low‐income families. They said the owner, Leon Nagin, of 425 Beach 146th Street, Far Rockaway, Queens, had boarded if, up prior to converting it to luxury units.

The announcement that sent the squatters away smiling at 5:45 P. M. yesterday was that Mr. Nagin had agreed to suspend any dernolition work for the rest of the week while he discussed selling the building to Housing and Development Administration for rental to low‐in come families.

Mr. Walsh told the group that there was “a very real possibility” that the city's proposal would be accepted, but warned that it might take several months to rehabilitate the building.

Buildings in Manhattan's Upper West Side Urban Renewal Area already contain about 150 squatting families, according to Operation Move In, a group of several anti poverty and community organizations in the area.

The families in the Upper West Side buildings, and in other buildings, have been as in moving into the vacant apartments by a variety of tenant organizations, community groups and churches.

They say that poor and middle‐income families are being squeezed out of Manhattan as the buildings they occupy are vacated and demolished to make way for new housing that they cannot afford. They argue that the current housing shortage is so critical that the poor and middle‐income families have a moral right to move into habitable boarded up buildings.

These arguments were offered in Civil Court yester day by volunteer lawyers on behalf of several families who made an unauthorized take over of apartments on East 13th Street. But a jury re turned a verdict in favor of the landlord, and authorized him to proceed with their eviction.

In this case, the landlord is the New York Eye and Ear Hospital, which owns four tenement buildings on 13th Street between First and Second Avenues.

The hospital seeks to clear tenants from the buildings to convert them to a residence for nurses.

Six squatter families were welcomed into the buildings, at 317 to 327 East 13th Street, on June 5 by families already living there.

“I was delighted to see them move in,” Mrs. Rose Arak, a resident for 40 years of 319 East 13th Street, said yesterday. “When those apartments were vacated and the tin was put over the windows, it was an open invitation to addicts and junkies and bums, and I was afraid to go into the halls alone.”

One of the squatter families moved from a city‐owned building in Brooklyn where it had been robbed of all furniture and clothing, and arrived with nothing but two sleeping bags, according to Mrs. Arak. “Now their apartment is completely furnished —by neighbors around here,” she added.

Philip Goldrich, a Bronx teacher who has lived at 317 East 13th Street for five years, also helped to welcome the squatters.

“I can't find a decent apartment at a price I can pay, so I know they can't,” Mr. Gold rich said yesterday.

Eric Greenbush, one of the lawyers representing the 13th Street squatters' families, will be back in court to day to press, for a stay of their eviction from Judge Richard W. Wallach, before whom the case was tried.

Over on East 11th Street, a group of squatters moved into buildings owned by a private landlord.

“He takes wonderful care of our buildings, as you can see,” she said, waving a hand at freshly painted, well lighted halls. “But he wants to hold apartments empty so he can sell the buildings for a lot of money, and that's just not fair in a housing crisis.”

The owner, Jack Gucker, was not available for comment yesterday. But squatters' representatives reported that they had met, with him and that he was considering letting the squatters stay for a limited time as rent‐paying tenants.
“I hope it is true,” said 13‐year‐old Luz Rosado, in a sunny, fifth‐floor apartment at 120 East 11th Street.

“On Allen Street we all had to sleep in one room,” the girl went on, gesturing toward her three brothers and a sister. “Here I have my own room, and everything is so nice.” She translated for her mother, Mrs. Anna Rosado, who already had sheer white curtains hung, at all of the windows and was talking of painting the kitchen white.

Another landlord that yielded somewhat toward a squatter this week was Columbia. University. It permitted Mrs. Juanita Kimble, who moved in with her eight children, to have the gas turned on and plumbing connected at 130 Morningside Avenue.

“No, we have not accepted her as a tenant,” a university spokesman said yesterday. “We acted on a humane basis.” The building is scheduled for eventual demolition and replacement, he said.