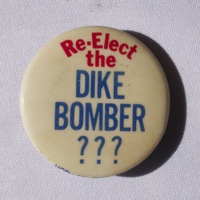 Throughout the U.S. war in Vietnam, policy-makers debated whether to bomb the system of dikes in North Vietnam as a way to drive the Hanoi government to the peace table. In 1965 and 1966, American military and political leaders rejected the idea, but it was revived again during the early 1970s by Secretary of State Henry Kissinger and the Nixon Administration. The bombing of North Vietnamese dikes became a powerful propaganda tool for the North Vietnamese government seeking global sympathy in its war with the U.S., as well as among anti-war activists in America. This button, created during the 1972 election season, plays on this controversy.