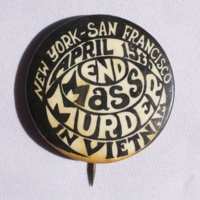 On April 15, 1967, the National Mobilization Committee organized a protest march against the Vietnam War from Central Park to the United Nations. One of the largest demonstrations of the Vietnam War era, an estimated 100,000 to 400,000 participated, including a range of anti-war and civil rights organizations. The march was peaceful, with five arrests, all of people who opposed the demonstration. During the event, Martin Luther King, Jr. Floyd McKissick, Stokely Carmichael and Dr. Benjamin Spock all gave speeches in front of the United Nations critiquing U.S. involvement in the war as well as the socioeconomic politics of the draft. Prior to the march, nearly 200 draft cards were burned by youths in Central Park. In San Francisco, Black nationalists led a march an estimated 20,000 mostly white demonstrators in San Francisco on the same day.

The influence of the counterculture is evident in the design of this button.