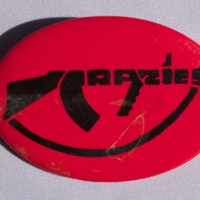 During the late-1960s, the Crazies was a small, anarchist, New Left cell in lower-Manhattan that included Sam Melville, a former engineering technician known as “the mad bomber”; anti-war activist and writer for RAT, Sharon Krebs; Krebs’ partner, Robin Palmer, an “ex-Navy, ex-porn star, ex-deep-sea diver” turned radical; and, George Demmerle, a FBI informant who called himself “Prince Crazy” and known for wearing a purple cape and pink Roman centurion’s helmet. Members of the Crazies believed it was necessary to “bring the war home” by staging political stunts, instigating disorder and bombings. They were critical of “corporate imperialism,” specifically the US involvement in the Vietnam War, as well as social and racial inequality. They referred to these actions, which were not aimed at taking life but destroying property, as “responsible terrorism,” patterned on the actions of IRA members in Ireland and FLQ members in Canada. Members of the group helped Canadian FLQ members, who had bombed about a dozen targets over a six-month period, including the Montreal Stock Exchange, flee the country and hijack an airplane to Cuba. In 1969, they also infiltrated a $200 a plate political fundraiser at the Waldorf Astoria in New York. Disguised as waiters, Palmer and Krebs stripped naked and presented pigs’ heads on platters to the dining politicians and wealthy donors. Some members of the group also participated in the theft of explosives from a warehouse in the Bronx, which were then used by Melville and others in a series of 8 bombings in New York City in 1969 and 1970, including United Fruit, Chase Manhattan, Standard Oil and an army headquarters, among other sites. Some members of The Crazies were also connected to the Weather Underground and other radical organizations during this period. Sam Melville, who was arrested and imprisoned at Attica, was killed during the Attica Prison Uprising.