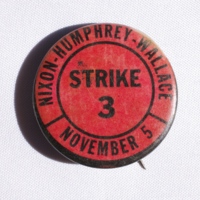 This button addresses New Left dissatisfaction with all three of the major presidential candidates in the 1968 election, Richard Nixon (Republican), Huber Humphrey (Democrat), and George C. Wallace (American Independent). Public disillusionment with the political process, the Vietnam War, and domestic social policies reigned throughout the late-1960s. In the end, Nixon and the GOP won the election, ushering in a new era of conservative politics, leaving many on the American political Left to continue to debate the best path for change, inside or outside "the system."