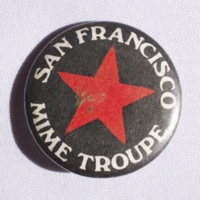 The San Francisco Mime Troupe was an avant-garde, “guerilla theater” troupe created by R.G. Davis in 1959 and dedicated to political satire. Peter Berg directed the group throughout its heyday in the 1960s. Initially performing in lofts and basements, the SFMT gained notoriety during the mid- and late-1960s for its rambunctious free performances outdoors in public parks, particularly Golden Gate Park. Their performances targeted political repression in the U.S., American military intervention abroad, racism, sexism, materialism and capitalism. Seen as a part of the countercultural movement, the SFMT also had several well-known run-ins with law enforcement, often charged with “obscenity”. Their 1965 Minstrel Show, Or Civil Rights in a Cracker Barrel, was performed in black face and offended some — both black and white. In another piece, an actor played a military policeman who paraded prisoners into Berkeley’s Sproul Plaza and began to abuse them. The troupe was also arrested on the campus of the University of California-Berkeley during the Free Speech Movement. Berg later went on to co-found, the Diggers with Emmett Grogan, a collective that brought a sense of theater to their charity work with the hippies and the poor in San Francisco.