Stop the War Against Vietnam 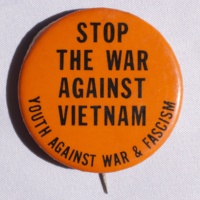 Stop the War Against Vietnam

The militant youth wing of the Workers World Party, the Youth Against War and Fascism opposed American military interventionism as early as 1962, when the group set up a picket line in mid-town Manhattan to alert the public to the danger of sending U.S. military advisers to Southeast Asia. Later in the 1960s and beyond, the socialist YAWF continued its anti-war activism and also supported the black liberation struggle in America and Africa.