I Support UE Strikers in GE 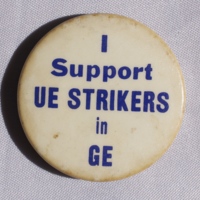 I Support UE Strikers in GE

The United Electrical, Radio and Machine Workers of America (UE) has a long history at General Electric. The UE local at the GE Plant in Schenectady, New York, was one of the first locals to join the more militant Congress of Industrial Unions in the 1930s. In 1946, the union mounted an effective strike resulting in pay increases for its members. Yet, by the late-1940s, the rising tide of McCarthyism had tainted the UE, which had left-wing associations, prompting the CIO to expel the UE and replace it with the International Union of Electrical, Radio and Machine Workers (IUE). This resulted in roughly two decades of fragmentation among workers at GE and little progress, particularly during a fairly disastrous 1960 IUE strike. By the end of the 1960s, though, the UE and IUE began to work together and mounted a successful 103-day national strike in 1969-70. The UE and IUE led an alliance of unions which broke the back of “Boulwarism,” GE's aggressive 20-year-long policy of "take-it-or-leave-it" bargaining. Boulwarism was named for Lemuel Boulware, the company's vice president of labor and community relations, who devised the strategy in reaction to UE's success in their 1946 strike, and to capitalize on the bitter divisions in the ranks of GE union members after 1949.