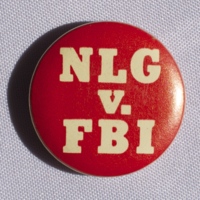 The National Lawyers Guild was formed in 1937 as a network of progressive lawyers interested in “human rights over property rights.” During the 1930s and 1940s, the NLG was involved in defending labor rights, fighting fascism in Spain and helping prosecute Nazis during the Nuremburg Trials. They also fought for racial justice and helped draft the U.N.’s Declaration on Human Rights. In the late-1940s and 1950s, the NLG pioneered storefront law offices for low-income people and defended many victims of the McCarthyite attacks on civil liberties, the Rosenbergs and Hollywood Ten.

According to the NLG website, “In the 1960s, the Guild set up offices in the South and organized thousands of volunteer lawyers and law students to support the civil rights movement long before the federal government or other bar associations were involved. Guild members represented the families of murdered civil rights activists Schwerner, Chaney, and Goodman, who had heeded the Guild’s call to join the civil rights struggle and were assassinated by local law enforcement/Ku Klux Klan members.

Lawsuits initiated by the National Lawyers Guild brought the Kennedy Justice Department directly into the civil rights struggle in Mississippi and challenged the seating of the all-white Mississippi delegation at the 1964 Democratic Convention. Guild lawyers defended thousands of civil rights activists who were arrested for exercising basic rights and established new federal constitutional protections in groundbreaking Supreme Court cases such as Dombrowski v. Pfister, which enjoined thousands of racially motivated state court criminal prosecutions; Goldberg v. Kelly, the case that established the concept of “entitlements” to social benefits that require Due Process protections; and Monell v. Department of Social Services, which held municipalities liable for brutal police officers.

In the late 1960s and early 1970s, Guild members represented Vietnam War draft resisters, antiwar activists, and the Chicago 7 after the 1968 Chicago Democratic Convention. Guild offices in Asia represented GIs who opposed the war. Guild members argued U.S. v. U.S. District Court, the Supreme Court case that established that Nixon could not ignore the Bill of Rights in the name of “national security” and that led to the Watergate hearings and his eventual resignation.

Guild members defended FBI-targeted members of the Black Panther Party, the American Indian Movement, and the Puerto Rican independence movement and helped expose illegal FBI and CIA surveillance, infiltration, and disruption tactics that the U.S. Senate Church Commission detailed in the 1975-76 COINTELPRO hearings, which led to enactment of the Freedom of Information Act and other specific limitations on federal investigative power.” (https://nlgmass.org/nlg-national-history/)