End the War in Viet Nam 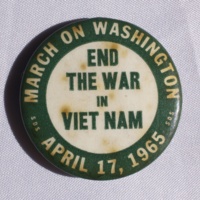 End the War in Viet Nam

On April 17, 1965, an estimated 25,000 people participated in a March On Washington to End the War in Vietnam, sponsored by SDS. After several hours of picketing in front of the White House, anti-war advocates rallied in front of the Washington Monument, where Paul Potter delivered his "We Must Name the System" speech. The event, which was the first major national anti-war demonstration, helped spur the meteoric growth of SDS.