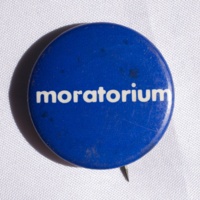 The October 15, 1969, Moratorium to End the War in Vietnam was a massive, nationwide anti-war demonstration and teach-in organized by a coalition of organizations, including the National Mobilization Committee to End the War. Millions of people are estimated to have participated in cities across the country and around the world, with the largest turn-out in Boston, where more than 100,000 listened to a speech by Sen. George McGovern. One month later, on November 15, 1969, more than 500,000 people attended a second huge moratorium demonstration in Washington, D.C. The rally was preceded by the March Against Death, where over 40,000 people paraded silently down Pennsylvania Avenue to the White House, each carrying a placard with the name of a dead American soldier or a destroyed Vietnamese village. The march concluded in front of the U.S. Capitol Building, where the placards were placed in coffins. At one point at a rally in front of the White House, folk singer, Pete Seeger, led the crowd in a version of John Lennon’s new song, “Give Peace a Chance,” interjecting, “Are you listening Nixon?” “Are you listening Agnew? “Are you listening Pentagon?” Later, President Richard Nixon remarked, "Now, I understand that there has been, and continues to be, opposition to the war in Vietnam on the campuses and also in the nation. As far as this kind of activity is concerned, we expect it; however under no circumstances will I be affected whatever by it."