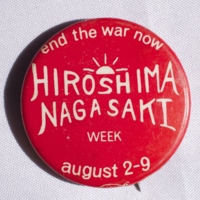 This button commemorates the 1945 bombings of Hiroshima and Nagasaki, Japan, linking the atomic bombings to fears concerning the possible use of nuclear weapons in the Vietnam War. The phrase "End the War Now" was used on other buttons and posters during the April 15, 1967 anti-war demonstrations in New York City and San Francisco, but it is unclear if this button is related to that protest.