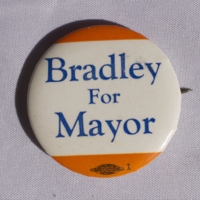 Tom Bradley was a former police officer elected as Los Angeles’s first African American mayor in 1973. He served in office until 1993, including the 1992 race rebellion that occurred following the acquittal of police officers that brutally beat black motorist, Rodney King. Bradley is the longest-serving mayor in L.A. history. He ran unsuccessfully for California governor in 1982 and 1986. The racial politics during the 1982 campaign, in which many expected Bradley to win, led to the coining of the term, “Bradley Effect” to describe the discrepancy between voter opinion polls and election outcomes in campaigns featuring a black candidate against a white opponent.