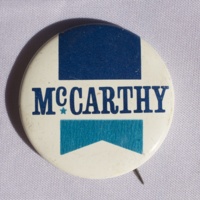 Eugene McCarthy, a Minnesota Senator, ran for the Democratic Party presidential nomination in 1968 as an anti-war candidate. His campaign inspired a number of young people who opposed the war and who had become disaffected with government. Some even cut their long hair, mustaches and sideburns to go "Clean for Gene" while campaigning. McCarthy’s surprising success in early primaries played a role in Lyndon Johnson’s decision to drop out of the race in March and Robert F. Kennedy’s decision to jump into the race. Ultimately, McCarthy lost the Democratic nomination that year to Hubert Humphrey.