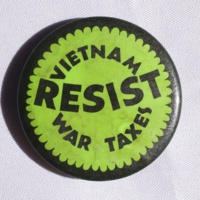 One tactic that anti-war activists used during the Vietnam War was to refuse to pay taxes, arguing that those monies went to support what they saw as an unjust war. Founded in 1965, the No Tax for War in Vietnam Committee campaigned for people to resist paying their 1964 federal income taxes. The campaign continued through 1967 and the group was successful in getting about 500 to refuse to pay taxes. After the Johnson Administration successfully pressed Congress to levy a 10% telephone tax to pay for increased troop levels in Vietnam, Chicago Catholic Worker activist, Karl Meyer, wrote the influential “Hang Up on War” pamphlet, which was distributed by national peace groups and became the basis of a War Resisters League national tax resistance campaign. In 1967, Gerald Walker of The New York Times organized Writers and Editors War Tax Protest. About 528 writers and editors pledged to refuse to pay the 10% Vietnam War tax surcharge, but only three publications — the New York Post (Jan. 30, 1968), the New York Review of Books (Feb. 15, 1968), and Ramparts magazine (Feb. 1968) — agreed to publish an ad publicizing the campaign. The New York Times did publish an early article about the protest on Sept. 17, 1967. In 1969, the National War Tax Resistance was organized and a press conference to announce the group was held in New York, featuring Allen Ginsberg, Pete Seeger, Kennett Love, and Bradford Lyttle. The group, which lasted until 1975, published a newsletter, two handbooks and established chapters across the country. Dr. Benjamin Spock was also a well-known tax resister during the Vietnam era.

The poem, "The Money Missing from Our Paychecks," by Stephen Wing, explored the issue of tax resistance:

We who eat
lest we go hungry, we who
lie down to sleep
because we know to the minute
what time we rise,
a bomber is blinking
across our bathroom mirrors that does not sleep,
a sentry walks the perimeter of our dim bedrooms
till the alarm rings
and we reach out to stop it
A truckload of soldiers comes leaping out
into smoke and noise when we
tear open our paychecks every Friday in the bar,
a bomb drops away from the black wing
even while we curse with ritual laughter the government
which has siphoned our blood in the night again
to fuel helicopters and tanks
A distant flame is casting those faint shadows
on the TV screen, a burning
that does not stop for Happy Hour,
while the bodies untangle from the pileup
and the referee bends to retrieve a fumble,
the family scattered
by an American bomb does not get up
The bodies are brown
as the football
waiting at the scrimmage line, but broken
like the field they farmed
they are too busy giving their
blood back to the soil
to blame us, but it is our battle they fight
for every breath, the money missing
from our paychecks every Friday has bought us
the pumping of their hearts to dip our
chips in and wash down
with our beer
it is our war
and only our waking hands can reach out
to stop it.

No Tax for War in Vietnam Committee