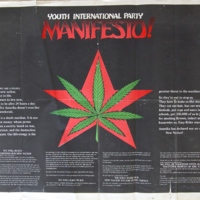 The Youth International Party, known as the "Yippies," was founded in 1967 by Abbie and Anita Hoffman, Jerry Rubin, Nancy Kurshan, and Paul Krassner. Other activists involved with the Yippies included, Stew Albert, Ed Rosenthal, Allen Ginsberg, Ed Sanders, Robin Morgan, Phil Ochs, Robert M. Ockene, William Kunstler, Jonah Raskin, Steve Conliff, John Sinclair, Dana Beal, Betty (Zaria) Andrew, Matthew Landy Steen, Judy Gumbo, Ben Masel, Tom Forcade, David Peel, Wavy Gravy, Aron Kay, Tuli Kupferberg, Jill Johnston, Daisy Deadhead, Leatrice Urbanowicz, Bob Fass, John Murdock, Alice Torbush, Judy Lampe, Walli Leff, Steve DeAngelo, Dennis Peron, and Brenton Lengel. According to Krasner, who coined the term, Yippies were “radicalized hippies.” In a 2007 essay in the Los Angeles Times, Krasner explained, "We needed a name to signify the radicalization of hippies, and I came up with Yippie as a label for a phenomenon that already existed, an organic coalition of psychedelic hippies and political activists. In the process of cross-fertilization at antiwar demonstrations, we had come to share an awareness that there was a linear connection between putting kids in prison for smoking pot in this country and burning them to death with napalm on the other side of the planet." Further, Anita Hoffman liked the term, but felt that "strait-laced types" needed a more formal name to take the movement seriously. She came up with "Youth International Party," because it symbolized the movement and made for a good play on words. Some referred to the group as "Yippie!," as in a shout for joy (with an exclamation mark to express exhilaration). As Abbie Hoffman wrote, "What does Yippie! mean?" Energy – fun – fierceness – exclamation point!"   The Yippies were influenced by The Diggers in San Francisco and often used guerilla theater, pranks, absurdist forms of protest, as well as political and cultural disruption in their activism. They sought to merge the personal with the political… and have fun in the process. ABC News once stated, "The group was known for street theater pranks and was once referred to as the 'Groucho Marxists'." Among their many storied antics, the Yippies suggested lacing the New York City water supply with LSD, sent joints to hundreds of random people in New York from the telephone book, threw fake money on the floor of the New York Stock Exchange and suggested a circle of hippies could “levitate” the Pentagon during an October 1967 protest. The Yippies understood the dominant role of mass media and television in contemporary society and often went on television, but refused to obey the normal rules of corporate TV production, hoping to “break the frame” and reveal to audiences the constructed nature of mass media. The Yippies were also involved in the underground press movement. Much of the writing and visual culture they produced consisted of obscenity-laced diatribes against mainstream society, but made few serious calls to militant action.    Abbie Hoffman and the Yippies first suggested a “Festival of Life” in the park outside of the 1968 Democratic National Convention in Chicago. They also planned to nominate a pig, nicknamed “Pigasus,” for President. Other New Left organizations joined the effort, which ultimately descended into chaos when Chicago police, at the order of authoritarian Democratic Mayor Richard Daley, attacked and brutally beat demonstrators in front of reporters and television cameras, causing an international controversy. In the melee, many Yippies were injured and arrested, including Abbie Hoffman and Jerry Rubin, who were put on trial as a part of what become known as the Chicago 7.    In 1970, an estimated 200-300 members of the Yippies descended on the Disneyland amusement park in Anaheim, California, to hold what was billed as their “First International Pow-Wow” to protest the U.S.’s continuing involvement in the Vietnam War and to liberate Disneyland as a symbol of the establishment. Hoffman authored a pamphlet in 1967, titled, “Fuck the System”; two books, “Revolution for the Hell of It” (1968) and “Steal This Book” (1971); and an LP record, “Woodstock Nation: A Talk-Rock Album” (1969).    The Yippies began to fragment and disintegrate during the 1970s. A disillusioned Hoffman committed suicide in 1989. Jerry Rubin became a “Yuppie” during the 1980s, embracing capitalism and starting a number of businesses. He was killed in 1994 when he was struck by a car. Even so, a number of Yippie followers have carried on in the same spirit.

Along the bottom right of this poster, it reads: “more copies: YIP 333 East 5th Street, NYC."

The main text on the poster is the Youth International Party Manifesto and it reads:
YOUTH INTERNATIONAL PARTY
MANIFESTO!   WE ARE A PEOPLE  We are a new nation.  We believe in life.  And we want to live now.  We want to be alive 24 hours a day.  Nine-to-five Amerika doesn't even live on weekends.  Amerika is a death machine. It is run  on and for money whose power  determines a society based on war,  racism, sexism, and the destruction of the planet. Our life-energy is the   greatest threat to the machine.  So they're out to stop us.  They have to make us like them.  They cut our hair, ban our music  festivals, put cops and narcs in the  schools, put 200,000 of us in jail  for smoking flowers, induct us,  housewive us, Easy-Rider murder us.  Amerika has declared war on our New Nation!   WE WILL BUILD AND DEFEND OUR NEW NATION  But we will continue to live and grow. We are young, we have beautiful  ideas about the way we should live. We want everyone to control their  own life and to care for one another. And we will defend our freedom  because we can’t live any other way.   We will continue to seize control of our minds and our bodies. We can't  do it in their schools, so we'll take them over or create our own. We  can't do it in their Army, so we'll keep them from taking our brothers.  We can't make it in their jobs, so we'll work only to survive. We can't  relate to each other like they do - our nation is based on cooperation not competition.   We will provide for all that we need to build and defend our nation. We  will teach each other the true history of Amerika so that we may learn  from the past to survive in the present. We will teach each other the tactics of self-defense. We will provide free health services: birth control and abortions, drug information, medical care, that this society is not providing us with.   We will begin to take control of drug manufacture and distribution, and  stop the flow of bad shit. We will make sure that everyone has a decent place to live: we will fight landlords, renovate buildings, live  communally, have places for sisters and brothers from out-of-town, and  for runaways and freed prisoners. We will set up national and  international transport and communication so we can be together with our  sisters and brothers from different parts of the country and the world.  We will fight the unnatural division between cities and country by  facilitating travel and communication  . We will end the domination of women by men, and children by adults.   The well-being of our nation is the well-being of all peace-loving  people.   WE WILL HAVE PEACE   We cannot tolerate attitudes, institutions, and machines whose purpose  is the destruction of life and the accumulation of "profit.”   Schools and universities are training us for roles in Amerika's empire of endless war. We cannot allow them to use us for the  military-industrial profiteers.   Companies that produce waste, poisons, germs, and bombs have no place in  this world.   We are living in the capital of the world war being waged against life.  We are not good Germans. We who are living in this strategic center of  Babylon must make it our strategic center. We can and must stop the  death machine from butchering the planet.   We will shut the motherfucker down!   WE WILL MAKE OUR NEW NATION FIT FOR LIVING THINGS   We will seize Amerika’s technology and use it to build a nation based on love and respect for all life.   Our new society is not about the power of a few men but the right of all  humans, animals and plants to play out their natural roles in harmony.  We will build our communities to reflect the beauty inside us.   People all over the world are fighting to keep Amerika from turning  their countries into parking lots!   WE WILL BE TOGETHER WITH ALL THE TOGETHER PEOPLES OF THE EARTH   Pig Empire is ravaging the globe, but the beautiful people everywhere  are fighting back. New Nation is one with the black, brown, red & yellow  nations.   Che said:  'You North Americans are very lucky.  You live in the middle of the  beast. You are fighting the most important fight of all, If I had my  wish, I would go back with you to North Amerika to fight there.  I envy  you.' "