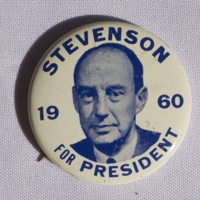 Adlai Stevenson was a lawyer, politician and diplomat known for his intellectualism, eloquent speaking and advocacy of progressive causes within the Democratic Party. Stevenson was the Democratic nominee for President against Republican Dwight Eisenhower in 1952 and 1956, losing both times. In 1960, he entered the Democratic primary for President again, but lost to John F. Kennedy, who ultimately defeated Richard Nixon in the general election. Kennedy appointed Stevenson to the position of U.S. Ambassador to the United Nations, where he served until his death in 1965.