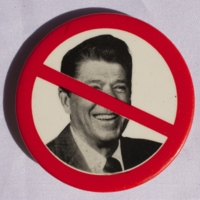 In 1966, Ronald Reagan ran successfully as the Governor of California on the Republican ticket. Reagan’s governorship between the years 1967 to 1975 was met with reaction from student protesters, specifically addressing Regan’s anti-civil rights stance and his campaign against Berkeley’s free speech and antiwar student protesters. In 1976, Reagan ran unsuccessfully for the Republic presidential nomination, but was successful in 1980 and 1984, serving two terms as President. As a politician, Reagan positioned his new conservatism as a reaction against 1960s liberalism. He remained a controversial, polarizing political figure throughout his career.