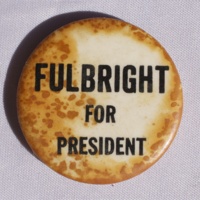 J. William Fulbright was a Democratic Senator from Arkansas from 1945 until his resignation in 1974 and the longest serving Chair off the Senate Foreign Relations Committee. Fulbright was a multilateralist who advocated for the creation of the United Nations and opposed McCarthyism and the House UnAmerican Activities Committee. Yet, he was also a segregationist and signed a revised version of the “Southern Manifesto,” a political document opposing the Brown v. Board of Education decision. He also participated in the Senate filibuster against the 1964 Civil Rights Act and voted against the 1965 Voting Rights Act, though he voted for a 5-year extension of the Voting Rights Act in 1970. He also played a leading role in opposing Richard Nixon’s attempts to appoint southern conservatives, Clement Haynsworth and Harold Carswell, to the Supreme Court, both of whom were seen as hostile to labor and civil rights. As Chair of the Senate Foreign Relations Committee, Fulbright was politically positioned to play an important role in the evolving U.S. policy in Vietnam. While he initially sponsored and voted for the Gulf of Tonkin Resolution, giving President Lyndon Johnson broad and unlimited power to escalate war in Vietnam, Fulbright later became an ardent critic of American policy there. In his 1966 book, The Arrogance of Power, Fulbright attacked the justification of the Vietnam War, Congress's failure to set limits on it, and the impulses which gave rise to it. Fulbright’s criticisms severely undermined the elite consensus on the war and won him growing support among the anti-war movement. In 1968, prior to Lyndon B. Johnson’s withdrawal from reelection, antiwar activists pressed alternative candidates for president, among them a Robert F. Kennedy-Fulbright ticket.