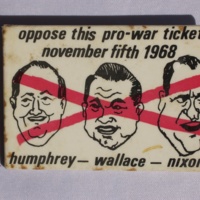 This button features the caricatures of George C. Wallace, Hubert Humphrey, and Richard Nixon, the major presidential candidates in the 1968 election. It signifies the growing disillusionment among many New Left activists regarding traditional electoral politics and the major political parties. In 1968, many New Left and anti-war voters sat out the election, causing some to charge that they delivered the election to Nixon over Democratic candidate Hubert Humphrey.

For more context on this election, see: