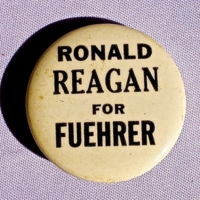 Former Hollywood actor, Ronald Reagan, launched his political career in 1966 by targeting University of California-Berkeley's student peace activists, professors, and, to a great extent, the University of California itself. In his successful campaign for governor that year, Reagan championed traditional authority and emphasized two themes, anti-government promises "to send the welfare bums back to work" and “law and order” rhetoric, including assurances "to clean up the mess at Berkeley," where civil rights activism, the Free Speech Movement and growing anti-war demonstrations had roiled the campus and brought national attention the previous year. Reagan strongly attacked student leaders, like Mario Savio, as well as UC President, Clark Kerr, who Reagan perceived as too lenient on campus demonstrators. Once in office after defeating Democratic incumbent, Pat Brown, Reagan directed the UC Board of Regents to dismiss Kerr from his position, cementing a turbulent relationship with the state’s leading institution of higher education, as well as Regan’s reputation as a key conservative opponent of the emerging New Left.